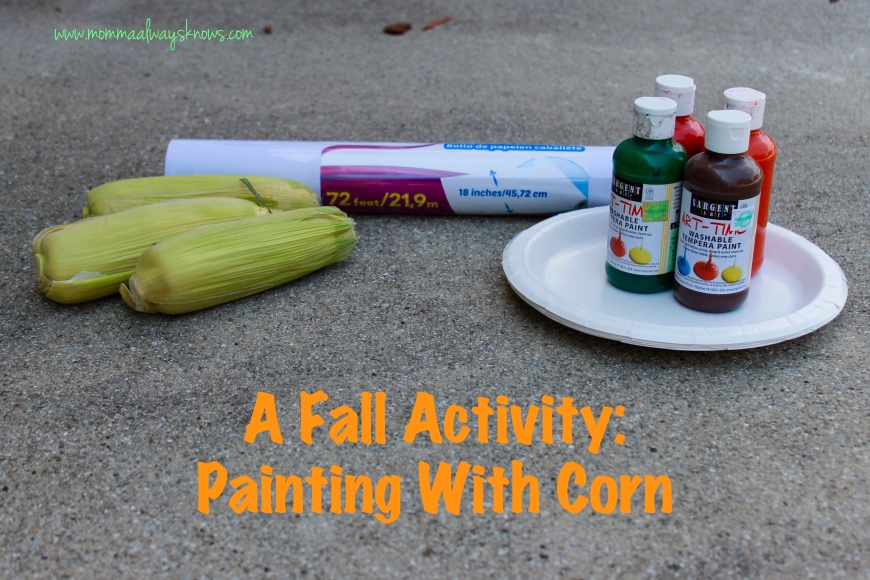 Have you tried the new Maple Pecan Latte?! It’s amazing – and the first thing I knocked off my Fall Bucket List!

Fall is, without a doubt, my favorite season.  Although now that I live in the South, fall doesn’t feel much different than summer until we hit at least mid-October.  But that doesn’t mean that I’m not fully embracing this new season with pumpkins and leaves and scents of cinnamon, nutmeg and clove!

It also means that I’m starting to do more fall activities with the boys, especially Lucas! I feel like I spent a crazy amount of time last year looking at fall activities for toddlers and preschools but never did them.  Now I have this mish-mash of ideas in my head and have decided to just roll with them!  I also like have “non-traditional” learning activities planned for Andrew’s nap time since Lucas isn’t as into letters and math and writing in the afternoon as he is in the morning.

This one was a totally winner!  And super easy to set up. Both boys love to eat corn on the cob so I thought we’d do something fun with ears of corn!  Plus the texture of the kernels makes really cool patterns.

You’ll need a few ears of corn (with the husk on preferably), paper plates, fall colored washable paint and a roll of paper – all of which we had on hand except for the corn! 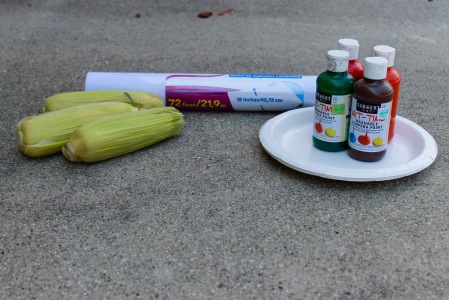 Anyway, first we husked the corn and Lucas thought that part was super neat – maybe that means I’ll have a helper in the kitchen next time we have corn on the cob for dinner.  Next I let him roll the cobs in paint I had put on paper plates and then we just rolled and rolled and stamped and stamped with different colors.  We talked about how it felt “bumpy” when we rolled the corn and what pattern they created. 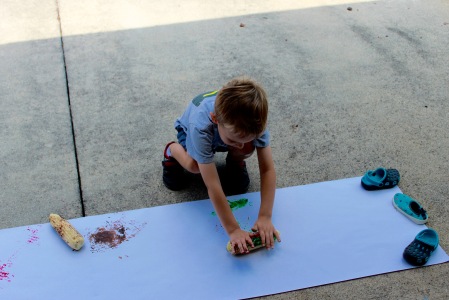 Then I just kind of let him have free reign to do whatever he wanted.  He ended up using the husks like a paint brush and then added the silk to make it even more brush like – watching him roll the silk in the husk was super cool!  I love seeing him create and solve problems on his own.

We drew pumpkins and rocket ship and dogs and spookies.

Then he decided he wanted to use his hands and feet!  It gave us another chance to talk about texture and how wet and squishy the paint feels on his hands and toes! Oh and to make a mess – a HUGE, SUPER FUN MESS!

Needless to say he was COVERED in paint by the time we were finished – thank goodness that paint is washable.  And that we were outside because he got a major squirt down with the hose.

While we watched his creation dry (and I cleaned up) he enjoyed a banana popsicle – because even though we’re doing fall activities it’s still 90 degrees here!

Have you started doing fall activities with your toddlers and preschoolers?!  Do you have a favorite?  I’d love to know what you’re doing with your kiddos this season to share links, Pinterest boards, or just let me know in the comments!